Move in May! May is National Physical Fitness & Sports Month 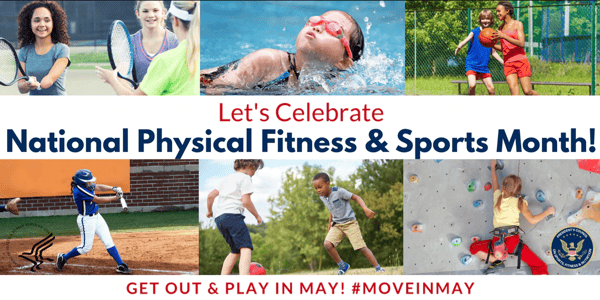 Celebrate May as National Physical Fitness & Sports Month! Outdoor play and exercise used to be a natural part of every childhood. But with the temptations of electronics and video games, loving parents are challenged with getting kids outdoors, according to 39% of adults polled. It’s crucial to keep kids physically active and playing outside. With proper exercise, kids can have improved muscular fitness, better bone health and protection from heart disease.

Here are some of the proven benefits from studies around the world.

The longer kids exercise, the more that childhood obesity can be completely prevented. In a study with 2,498 kids aged 8 to 17, those who exercised longer had a lower body mass index, and the inverse was true of kids who exercised for five minutes or less.

Higher aerobic exercise in childhood has been linked to more protection against cardiovascular disease in adulthood, according to a finding by researchers at the University of Georgia. Kids who engaged in aerobic exercise, like running and jumping, had a 36% decreased risk.

High amounts of physical activity have been linked to better arterial health and less arterial stiffness in children aged between 6 and 8, according to a report conducted at the University of Easter Finland. The researchers concluded that light physical activity, such as walking, did not put sufficient strain on the arteries to prevent stiffness. Instead, moderate to vigorous exercise, such as that a child would get on a playground, resulted in the reduced stiffness.

Here are some ideas to celebrate National Physical Fitness & Sports Month this May. Maybe one or two of them will fit in your schedule.

As you can see, childhood exercise is vital to lifelong health. When you encourage outdoor play, you’re helping to instill habits that will last years, long into adulthood. What better gift to offer your children?